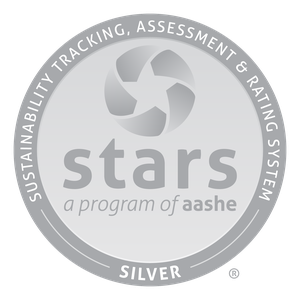 Does the institution have one or more active student groups focused on sustainability?:
Yes

A brief description of active student groups focused on sustainability:

Two proposals by the student interns from the Sustainable Enterprise Accelerator were accepted by the Clinton Global Initiative in 2015, and are still ongoing:
(1) an aquaponics demonstration/research project in which fish and swiss chard will be raised, with lessons learned shared with a village in Uganda where it is intended to be replicated as healthy sources of nutrition and as cash crops. The project uses a PV-powered water circulation pump, and is expected to produce twice the quantity of food using only 10% of the water required by conventional gardening practices (see http://www.seasru.com/#!aquaponics/ii996 for more details), and
(2) the "Green Leaves" Departmental Sustainability Self-Certification project, which has resulted in two departments being certified (the Parks, Conservation & Recreation Therapy Department that achieved Leaf level 1 certification in 2017, and the Library Operations Department that achieved level 2 certification in 2018.


The website URL where information about the student groups is available (optional):
http://www.seasru.com/

Does the institution have gardens, farms, community supported agriculture (CSA) or fishery programs, and/or urban agriculture projects where students are able to gain experience in organic agriculture and sustainable food systems?:
Yes

The Macoskey Center infrastructure includes market/demonstration gardens (for students to gain experience in organic/permaculture gardening), as well as organic community gardens available to any community members interested learning about and getting involved in organic gardening systems (see http://www.sru.edu/news/073115a#sthash.MbTVCCbV.dpuf and/or https://www.youtube.com/watch?v=_DOwHsIkDfU for additional details).

Gardening and composting workshops are typically offered by Macoskey Center student workers and G.A.s each spring, and students participate in a Farmers Market and the Slow Foods community club, as well as other CSA-related panel discussions, conferences, organizations and miscellaneous activities.

SEA has also regularly partners with the Penn State Agricultural extension to bring workshop series such as "FarmSense" agricultural workshops to SRU, to which selected SEA interns may receive free enrollment (additional information available at http://www.sru.edu/news/102115d#sthash.DeCNhtV0.dpuf).


The website URL where information about the gardens, farms or agriculture projects is available (optional):
http://www.sru.edu/news/073115a#sthash.MbTVCCbV.dpuf

Does the institution have student-run enterprises that include sustainability as part of their mission statements or stated purposes (e.g. cafés through which students gain sustainable business skills)?:
Yes

A brief description of the student-run enterprises:

Rock Roast Coffee is a student-run nonprofit enterprise that markets and sells organic, shade-grown fair-trade coffees grown sustainably in Nicaraguan coffee farms. The farms not only cultivate delicious natural coffee beans, but the canopy of trees they are grown under also provides habitat for endangered bird species.plantations of Costa Rica. The proceeds from these purchases will support Slippery Rock students' sustainability service learning opportunities​ in Nicaragua, where the coffee is grown.


The website URL where information about the student-run enterprises is available (optional):
http://www.rockroast.org/

Does the institution have sustainable investment funds, green revolving funds or sustainable microfinance initiatives through which students can develop socially, environmentally and fiscally responsible investment and financial skills?:
Yes

Each semester, students may submit proposals for Green Fund Grants to implement sustainable projects on campus. The maximum grant per project is $20,000, and all proposals are reviewed by a Green Fund Advisory Board made up of 11 individuals, five of which are SRU students.

Proposal requirements may be found by clicking on the "Green Fund Grant Process RFP" link on our sustainability website referenced below. Sample Green Fund Grant projects previously funded may also be found on the same page (scroll to the bottom and click on "Description of Previously-Funded Green Fund Projects").

Does the institution have conferences, speaker series, symposia or similar events related to sustainability that have students as the intended audience?:
Yes

A brief description of the conferences, speaker series, symposia or similar events related to sustainability:

SRU holds a series of campus-wide events every April to celebrate "Earth Days". Typically, twenty to thirty events/activities are held to increase environmental and sustainability awareness and appreciation on the part of our students. Events and activities included every year include:
(1) the"Earth Day Carnival on the Quad" (which includes educational games and demonstrations, sustainability club-staffed tables, and chances to win prizes for those participating in a certain number of activities);
(2) An environmental film series, some of which students can gain class credit for attending;
(3) A World Health Class "Earth Day Festival", in which sustainable class projects are presented in a series of poster sessions;
(4) Featured speakers such as J. David Hughes of the Post Carbon Institute, Chad Pegracke (CNN's 2013 Hero of the Year for his role in cleaning up rivers), Dr. Robert Musil (CEO of the Rachel Carson Council and winner of the 1985 Nobel Prize for Peace); and Dr. Stephen Mulkey, past president of Unity College, the first university to entirely divest from fossil fuel industry-supporting corporations.
(5) An "EarthFest", held in conjunction with the SRU Arts College Kaleidoscope Arts Festival, which features sustainability-themed entertainment and local vendors of sustainably-produced food and products.

In 2017, SRU is also hosting a "No Impact Experiment" for students in late September to segue into AASHE's Sustainability Month events.

The Student Enterprise Accelerator typically host/co-sponsors speakers on sustainability each year, and leads student groups on tours of sustainability demonstration sites such as the Phipps Conservatory, the Chatham College Eden Campus, as well as an Eco-tour of Costa Rico.

The Robert A. Macoskey Center also hosts speakers, class and public tours, gatherings, and panel discussions on topics such as organic gardening and community supported agriculture.


The website URL where information about the conferences, speaker series, symposia or similar events related to sustainability is available (optional):
---

Does the institution have cultural arts events, installations or performances related to sustainability that have students as the intended audience?:
Yes

A brief description of the cultural arts events, installations or performances related to sustainability:


The website URL where information about the cultural arts events, installations or performances is available (optional):
http://www.sru.edu/life-at-sru/arts-and-culture/kaleidoscope-arts-festival

Does the institution have wilderness or outdoors programs (e.g. that organize hiking, backpacking, kayaking, or other outings for students) that follow Leave No Trace principles?:
Yes

A brief description of the wilderness or outdoors programs that follow Leave No Trace principles:

The mission of SRU's Campus Recreation's Outdoor Adventures Program is to create and maintain opportunities for Slippery Rock University students, faculty, staff, and community to safely learn, enjoy and appreciate outdoor recreation while protecting our environment. SRU students are invited to participate in as many activities as they desire.

An informal SRU Trails committee of student and faculty volunteers work to develop and maintain natural hiking trails using Leave No Trace principles, and have used Green Fund Grants and funding from the Office of Sustainability to delineate wetlands along the main on-campus "Overlook Hiking/Biking Trail", to construct causeways protecting the wetlands, and to construct trail head kiosk signage that illustrates the trails' layout and highlights natural features of the area.

Additional equestrian, hiking, and biking interpretive nature trails are also available at the Audubon Sanctuary at the Macoskey Center and follow the Leave No Trace principle.


The website URL where information about the wilderness or outdoors programs is available (optional):
http://www.sru.edu/life-at-sru/student-activities/campus-recreation/programs

A brief description of the sustainability-related themes chosen for themed semesters, years, or first-year experiences:

"Small Steps, Big Payoff" is the theme of SRU's Energy Action Campaign that encourages students to pledge to change three small things in their life that can save energy. Students taking the pledge become eligible to win prizes such as reusable water bottles and bookstore coupons that can be used to purchase educational materials. The energy pledge can be accessed by anyone with an sru.edu email address by clicking on the "Energy Action Pledge" displayed prominently on the main sustainability web page.

In addition, the Office of Sustainability coordinates Earth Week activities that are promoted via posters, online event calendars and social media that use the Earth Days Network theme chosen for that year.


The website URL where information about the sustainability-related themes is available (optional):
http://www.sru.edu/sustainability

Does the institution have programs through which students can learn sustainable life skills?:
Yes

A brief description of the programs through which students can learn sustainable life skills:

In addition, a "No Impact Week Experiment" led by Dr. Shawn Davis teaches sustainable life skills to students in a week-long program held during Fall semester.

A sustainability Facebook site and Twitter feed are also used to engage students and provide informative articles, blogs, and links to other sustainability sites.


The website URL where information about the sustainable life skills programs is available (optional):
https://www.sru.edu/news/092017c

A brief description of the sustainability-focused student employment opportunities offered by the institution:

The Geography, Geology and the Environment department typically shares one or two GIS mapping students (paid student workers) with the Office of Sustainability; these students have created and maintain our Sustainable Features Campus Map, as well as documenting land use data used to complete sustainability surveys (acres of protected sanctuaries, acres of building footprint, permeable vs. non-permeable acreage, site contour maps for planning mow vs. no-mow acreage, etc.).

A copy of the sustainable features map can be downloaded from our sustainability landing page referenced below by clicking on the "Campus Sustainability Features Map" header at the bottom of the page.

Both the Macoskey Center for Sustainable Systems Education and Research and the Sustainable Enterprise Accelerator typically employ full-time graduate assistant(s), as well as additional student workers (e.g., to work on the demonstration gardens, composting services, etc.) on an as-needed basis.

Does the institution have graduation pledges through which students pledge to consider social and environmental responsibility in future job and other decisions?:
No

A brief description of the graduation pledges:


The website URL where information about the graduation pledges is available (optional):
---

Does the institution have other co-curricular sustainability programs and initiatives?:
Yes

A brief description of the other co-curricular sustainability programs and initiatives:

A student video production documented the history of the ALTER project, which eventually led to the creation of the current Macoskey Center for Sustainable Systems Education and Research. This video can be viewed at https://www.youtube.com/watch?v=KOU1kTkvKiI.


The website URL where information about other co-curricular sustainability programs and initiatives is available (optional):
https://www.youtube.com/watch?v=KOU1kTkvKiI.